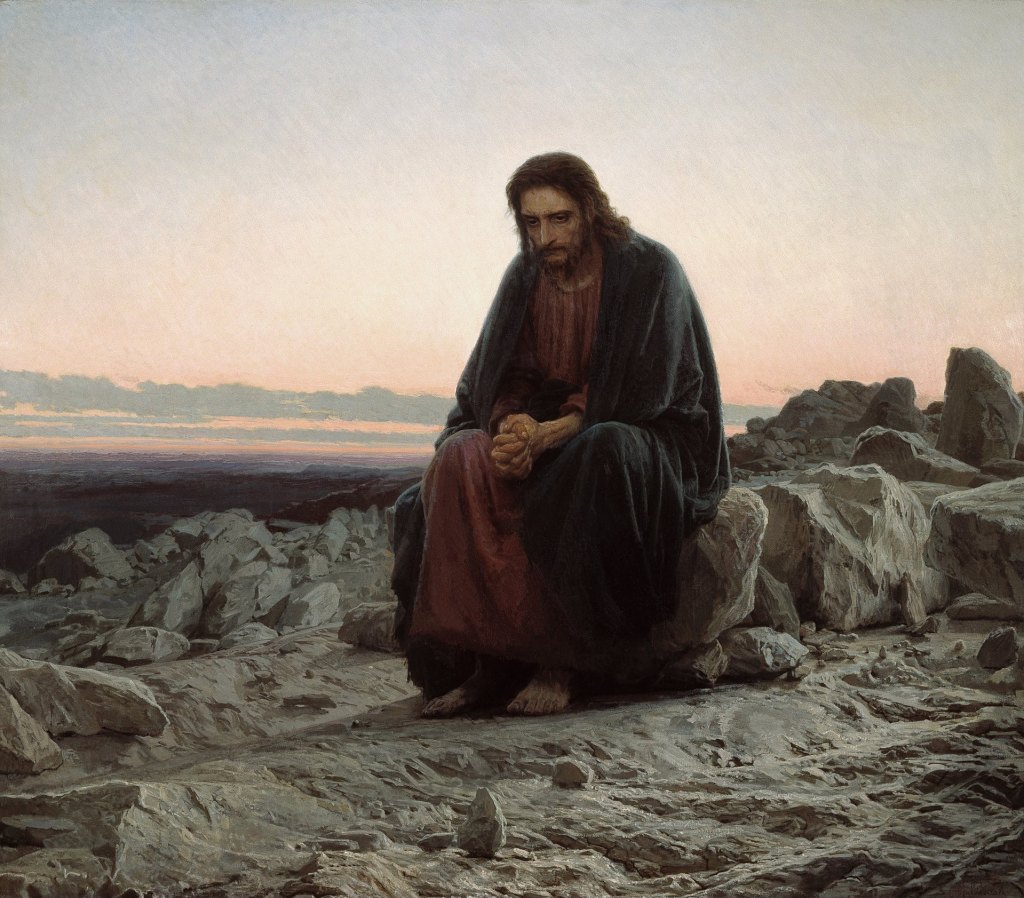 In 1 Samuel 16 we see that David is anointed king by Samuel. Interestingly enough, what follows his anointing and enthronement as king brings light to the kingship of Christ. A chapter later, in 1 Samuel 17, King David faces one of his biggest challengers and the enemy of his people, Goliath. In contemporary times people have used the phrase “David versus Goliath” to describe a tough fight or even a battle worth fighting for. It is no coincidence that David is faced with a battle following his anointing. As anointed king, David is responsible for leading his people to battle and to bring victory to the nation. Similarly, in Matthew 3:16, Jesus is baptized and anointed king by the waters and the descent of the Spirit in the form of a dove, “The Fathers of the Church therefore rightly saw this event as analogous to the anointing by which kings and priests in Israel were installed in office” (Pope Benedict XVI, Jesus of Nazareth, p. 25). After this episode Jesus, the king, is taken to the wilderness and faced with the real enemy of the people, the devil.

We have now come to see an almost direct parallel between the story of David and that of Christ. As Lent begins, we must have a deeper understanding of the temptations of Christ so that we too can be well prepared for the battles that we are faced with on a daily basis. We recall the temptation of Jesus in the synoptic gospels, but I will be following the liturgical gospel cycle according to the Chaldean Church which employs the gospel of Matthew (4:1-11) for the first week of Lent.

“Then Jesus was led up by the Spirit into the wilderness to be tempted by the Devil. And he fasted forty days and forty nights, and afterward he was hungry. And the temper came and said to him, ‘If you are the Son of God, command these stones to become loaves of bread.’ But he answered, ‘It is written, ‘Man shall not live by bread alone, but every word that proceeds from the mouth of God.’”

There are many relevant significances for Jesus to fast for specifically 40 days and nights. One significance is the great story of Noah and the flood (Gn 7), where we see a new creation and a covenant with God following the flood. The sign for the Noahic covenant was a rainbow, which unfortunately has been modernly used for a different meaning—I will save this discussion for a later time. In any case, it was only after Jesus fasted that he was tempted by the devil. We must be vigilant during this Lent to ensure our readiness for temptations that await us; regardless of how many times we have failed in our Lenten promises. Also note that Matthew is very direct and specific when mentioning that Jesus was “hungry.” Why the detail? The devil tempted Christ when he was most vulnerable. Similarly, the devil waits for us when we are most vulnerable to throw temptation in front of our feet. We then see the first temptation of Jesus for him to turn the stones into bread. The devil was aiming towards Jesus’s flesh and using his hunger for his own advantage. The devil will do the same things to us. We live in a time where we want to give ourselves what we want when we want it. This is a boiling recipe for destruction. When we give in to every bodily desire we have, we begin to lose our dominance over our bodies and will no longer have control. What I mean by this are the sins of: gluttony, pornography, contraception, other sexual sins, etc.

“Then the Devil took him to the holy city, and set him on a pinnacle of the temple, and said to him, ‘If you are the Son of God, throw yourself down; for it is written, ‘He will give his angels charge of you,’ and ‘on their hands they will bear you up, lest you strike your foot against a stone.’ Jesus said to him, ‘Again it is written, ‘You shall not tempt the Lord your God.’”

The second temptation of Jesus was aimed towards pride. I’m sure we’ve all heard the phrase, “show me what you got.” For Jesus to prove himself to the devil and allow his angels to catch him would be de facto prideful. The great sin of pride can really be something that makes its way into someone’s life in a very deceitful manner, and that is what the devil does best. We must keep stay vigilant and keep our eyes wide open for the temptation of pride in our daily lives, whether it be school, work, or home. A beneficial devotion that would help with overcoming pride is the “Litany of Humility.” It would be a good idea to say this either in the morning before you start your day or at night before going to sleep. You can find this by simply googling it.

“Again, the devil took him to a very high mountain, and showed him all the kingdoms of the world and the glory of them; and said to him, ‘All these I will give you, if you will fall down and worship me.’ Then Jesus said to him, ‘Begone, Satan! For it is written, ‘You shall worship the Lord your God and him only shall you serve.’ Then the devil left him, and behold, angels came and ministered to him.”

Lastly, we find Jesus being tempted with his eyes as he bears the kingdoms and glory of the world. I would like to give a friendly reminder to my readers that “…you are dust, and to dust you shall return” (Gn 3:19). Our bodies are temporary, but our souls are immortal and therefore we will take nothing back with us from this world besides the state of our souls at the moment of our departure. Our attitude during this time of Lent should be letting go of anything we are attached to whether it be technology, shopping, cars, and other luxuries that constantly occupy our minds and souls.

Again, no matter how many times we have failed during Lent, this is different and could potentially change the way you live your life for the better. I encourage you all to have a plan to fast from food, social media, habitual sins, etc. and add prayers like scripture reading, rosary, daily mass, and anything else that could help you grow spiritually. If you’re stuck on what to give or add, talk to a priest or someone that would give you helpful tips. Even though sometimes temptations can be extremely tough to handle and that it may seem like we are battling our own Goliath; don’t forget: we are all in this battle together and the person that is leading us to victory is Christ the king, but it is up to us and our willingness to follow this victorious path.